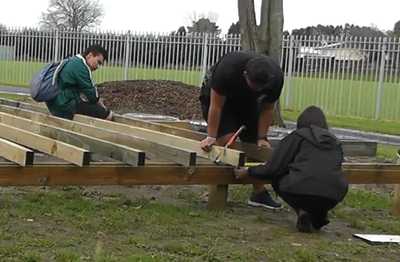 These weeks we nailed the joists on to the bearers and sawed off the extra overhanging wood on the sides.Some of the joists are doubled as they had to span a bit further than 1.5m. The level of the tyres seemed to have sunk so we had to screw some packers under the joists on top of the tyres. We put a slight tilt on the floor from the back of the stage to the front of the stage as if it were to stay level the water would puddle and not drain off. We did this by putting some rubber packers under the bearers at the back and using wider packers on top of the tyres. This took us through weeks Eight-Ten as on weeks Eleven and Twelve it was school holiday. Although we missed two weeks we should still finish the stage and sound dome before we run out of time. At the end of week Ten we started to screw down the ply wood floor. We chose ply wood because Carlos from the dance crew said its better to dance on ply wood instead of decking timber. We lined up the ply wood along the joists with the string line.