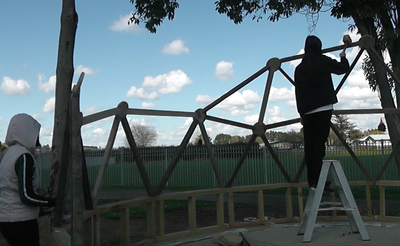 We started to sort out the struts and hubs for the dome. Originally the hubs were smaller than they are now, the reason we had to make the hubs bigger is because some of the struts couldn't reach the hubs, we had to redo all the hubs as it would look weird if some were smaller than others. Once we got that sorted we had to get the right struts in the right place, when connecting the struts to the hubs we spaced them out. When we got them to where we wanted them we then screwed through the struts to the hubs to fix them in place. We had to screw on an angle so that the screw didn't poke out the bottom.