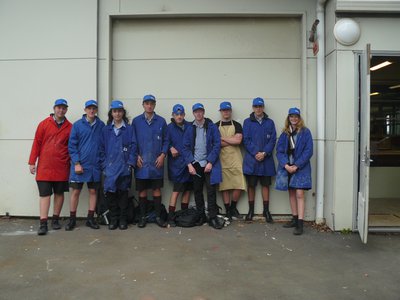 In the beginning of hearing about the Build-Ability program a large portion of the class had chosen to join the project, we exceeded the member cap. To resolve this issue we each had a single piece of paper to write whom's name we wished to eliminate, after this we had the right amount of members. The team continues as follows (Left to right of photo).

Daniel Goldstraw; The overall leader of the team and leader of the 'Bridge' project, among other things he is also part of the marketing for the project. He doesn't really know what to do in future but he does know that its within the Building and Construction Industry.

James Mason; He is the leader for the Pergola/Swing project and part of Safety Management. He hopes to become a Builder/Carpenter and become qualified as a Plumber/Gas-Fitter.

Robert Mills-Vlaardingerbroek; I am the head of the 'Blogging' or writing department of the team along with being within the roster for the 'Bridge' project. In future I have no clue what I wish to become but BCP seems like a good start.

San Drollet; He is within the roster for the team that is constructing the 'Photo-Frame' project. His future is to become either an accomplished Builder or Police-Officer.

Niko Mravicich; He is part of the roster for the 'Pergola/Swing' project among our groups. In the future he like myself, doesn't know what to do but BCP and Build-Ability seemed like a good start.

Keagan Oberholzer; He is part of the team constructing the 'Pergola/Swing' too. In his future he wishes to become a Builder/Carpenter.

Alex Bristow; He is in charge of the photography for the 'Photo-Frame' team and he wants to become a successful Builder when he is older.

Jack Revell; He is part of the team that is constructing the 'Bridge' and is the photographer for that group as well. In future he wishes to become a Builder.

Sarah Annette; She is the leader for the 'Photo-Frame' project team along with being the Liaison for the team. In future she wishes to become a Carpenter.

Out of the group's description of the team members it should be apparent what projects we are going to be constructing for Build-Ability (All of the projects go towards the Build-Ability program). The projects we have planned to build are as follows; A Bridge over the top of a veggie garden, a Photo-Frame for the students to use (International and Group Photos) and finally a Pergola with a swing seat for relaxation and to add to the garden area we are building it in.